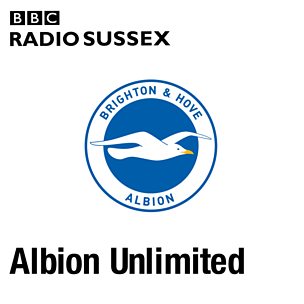 Broadcaster Jacqui Oatley, and our preview ahead of Wolves.

Burnley analysis, Tony Pulis, striking options and an assessment of the season so far.

Albion striker Glenn Murray joins the team to celebrate the 100th episode of the podcast.

The podcast chat about the first four games of the season and the transfer window.

The podcast previews the restart of the Premier League & the upcoming game with Arsenal.

Our top team Adrian Harms, Johnny Cantor and Warren Aspinall are back.

Former Albion favourite Gerry Ryan reminisces about his career with the club.

Albion's Glenn Murray - the impact of coronavirus on football, players & the nation.

The podcast discuss the appointment of Graham Potter as Brighton's new manager.

Tributes to Peter Brackley and Ben Thatcher from Royal Blood.

The pod discuss the issue of mental health and preview the trip to Man City.

Albion Unlimited returns for a preview of the new Premier League season.