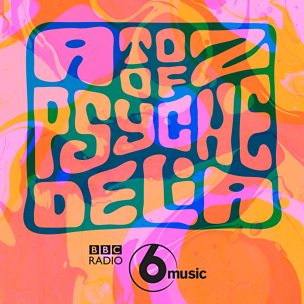 Welcome to the A to Z of Psychedelia on 6 Music

Introductory episode touching all psychedelic bases to wet your whistle.

A is for Acid, Animals and Ambrose Slade

B is for Barrett, Buckley and Byrds

Syd Barrett's life story enclosed here - how did he get the name Syd?

C is for Cream, Crazy World and Chocolate Watchband

Chocolate, Cream and Crazyness - from folk to psychedelia discussed here.

D is for Doors, Donovan and Dantalian's Chariot

Doors, Donovan and Double David's - bring it on .

E is for Easy Riders, Experiments and Electric Prunes

F is for Funkadelic, Fairport and Flowers

Flowers in Your Hair - a band wagon song - discuss.

G is for Groundhogs, Garcia and Grace Slick

H is for Hendrix, Head and Hapshash

Music from the Monkees and Jimi Hendrix as we travel through the letter H.

I is for International Times, Iron Butterfly and Incredible String Band

How much do you not know about Jefferson Airplane - find out in this episode.

L is for Love, Lewis Carroll and Lucy In The Sky

M is for Move, Monterey and Moby Grape. Part 1

Middling, moody, misunderstood and magical - that'll be M part 2 then.

M is for Middle Earth, Mardas and Mamas and Papas. Part 3

Mamas and The Papas deconstructed - that'll be M part 3 then.

N is for Nirvana, Nice and Nuggets

N stands for naughty and nice.

O is for Owsley Stanley, Other Half and Os Mutantes

P is for Prankster, Procol Harum and Pink Floyd. Part 1

Pigs, pipers and pranksters - that'll be P part 1 then.

P is for Parliament, Pearly Queens and Pink Fairies. Part 2

In this episode, Janis, George and Trevor that'll be P Part 2 then.

P is for Peel, Protest and Purple Band. Part 3

Q & R are for Quicksilver, Roky and Rolling Stones

Exactly what it says on the tin - Sgt Pepper scrutinised.

Strawberry sky seeds - all to be found in S part 2

S is for Skip Spence, Studios and Syd Barrett. Part 3

Marc and Rob can be found skipping round the studio in S part 3.

S is for Small Faces and Steve Marriot. Part 4

An episode dedicated to the Small Faces - S part 4.

S is for Smoke, Shankar and Strawberry Fields. Part 5

Sitars, The Salvation Army The Krays feature in S part 5.

S is for Steppenwolf, Spirit and Sly Stone. Part 6

S is for sychedelia without the P - that's S part 6.

S is for Soft Machine, Simon Dupree and Side Trips.Part 7

Seriously stretched out S section concludes in this episode - Phew.

T is for T. Rex, Trip and Tintern Abbey. Part 1

We get it on with T-Rextasy in T Part 1

T is for Traffic, Tomorrow and Technicolour Dream. Part 2

Hairy Traffic Control, is where T part 2 takes us

U & V are for UFO, Vanilla Fudge and United States of America

Alice B Tocklas, Linda Ronstadt and Dorothy Moskowitz all feature in this episode

V is for Van Vliet aka Captain Beefheart. Part 1

V is for Voorman, Vincebus Eruptum and Velvet Underground. Part 2

W is for Woodstock and Brian Wilson's Beach Boys

W, X & Y are for Who, Yardbirds and West Coast

The Who write a mini opera - rock on Tommy and Eric Clapton leaves the Yardbirds.

Y & Z are for Yellow Submarine and Zombies

The film Yellow Submarine is released in 1968, that could be 50 years ago today

Z is for Zappa and Year Zero

Z is for zappa - TV Zappa? No Frank Zappa.

A to Z of Punk: A is for Anarchy, Ants and Adverts

The Anarchy Tour, Goddard's inspiration for Adam and the Ants and the ‘One Chord Wonders’

A to Z of Punk: B is for Boredom, Brains and Blondie

The story of Buzzcocks, ‘hardcore’ punk band Bad Brains and the band Blondie

A to Z of Punk: C is for Complete Control and The Clash

A to Z of Punk: E is for EMI, Eater and the Electric Chairs

Who was Eddie in Eddie and the Hot Rods? Plus punk rock's answer to the Cavern, Erics

A to Z of Punk: F is for Falling Out, Fire Engines and Factory

Tales of The Fall, the phenomenon of fanzines plus the ubiquitous Factory Records

A to Z of Punk: G is for Grundy, Goading and Gobbing

A to Z of Punk: H is for Heroin, Heartbreakers and Hynde

The advent of heroin use in the punk scene, plus tributes to Buzzcocks star Howard Devoto

A to Z of Punk: I is for Idol, Iggy and Influences

A to Z of Punk: J is for Jam, Jelly and Jordan (not that one)

How Jello Biafra was influenced to form ‘Dead Kennedys’, plus the exploits of Jordan

A to Z of Punk: K is for Killers and Kaos

Hear tales about Killing Joke, plus Nick Kent and Kevin Rowland, who formed The Killjoys

A to Z of Punk: L is for Lux Interior, Lydia Lunch and Lesser Free Trade Hall

Lux Interior of the Cramps, the birth of No Wave plus the most famous Pistols gig

A to Z of Punk: M is for two Malcolms and a Marquee

A to Z of Punk: N is for Nipples and No Future

A to Z of Punk: O is for Outrage and Osterberg

O is for outrage, so be warned. It's also for Gene October and James Newell Osterberg.

A to Z of Punk: P is for Punk and Post Punk (obviously)

P is also for Public Image and the Prefects. Plus we discover just who invented the Pogo

A to Z of Punk: Q is for Queen, the Queen and Queensland

A to Z of Punk: R is for Ramones, Raincoats and Rough Trade

A to Z of Punk: S is for Stranglers, Suicide and Spitting. Part 1

A brief history of the Stranglers and the murky question - just who introduced spitting?

A to Z of Punk: S is for Siouxsie, Strummer and Stiff. Part 2.

A to Z of Punk: T is for Talking Heads, TV Personalities and Throbbing Gristle. Part 1.

A to Z of Punk: T is also for Transmissions, Thau and TRB. Part 2.

TV and radio transmissions that brought punk to the nation, or in some cases, didn't...

A to Z of Punk: U & V are for Undertones, Upstarts and Vibrators

Why Sid Vicious was named after a hamster, plus how Charlie Harper became a punk hero

A to Z of Punk: W is for Wally, Wire and Wreckless Eric