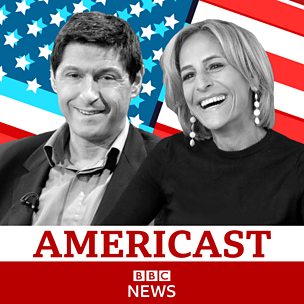 The Fall of Kabul

The Biden administration defends its withdrawal from Afghanistan.

It's been a blast, Americast!

The truth is out there... or at least it's about to be.

Putin His Foot Down

Inside the Biden and Putin summit

As the G7 gets underway, we're joined by the US national security advisor, Jake Sullivan.

Will Trump lead the opposition to Biden?

George Floyd: One Year On

How America has changed… and how it hasn’t.

A shot and a beer in Buffalo.

Not Biden his time

What has President Biden achieved in 100 days?

Anger and Protests in Minneapolis

Another black man dies at the hands of the police.

Trump finally breaks his silence over the alleged sex crimes of Congressman Gaetz.

How should America tackle gun violence?

How much influence do the Irish have on American politics?

Trump’s back – but did his CPAC appearance hit the right notes?

Has the New York Governor gone from hero to zero?

Mitch Ado About Nothing

The impeachment trial heats up.

Trump quits the movies, but holds on to the GOP.

We Need to Talk about Kevin

A Republican grandee sucks up to Trump.

Who Let The Dogs Out?

Americast's Got Talent with Piers Morgan

Piers judges Americast's Got Talent and tells us an incredible story about Donald Trump.

Donald and the Giant Impeach

President Trump has been impeached. Again.

President Trump calls for an 'orderly transition of power'.

The day the mob ruled in the US Capitol.

Has Donald Trump committed an offence that could land him in jail?

Maitlis, Sopel and Anthony take a look back at an extraordinary year in US politics.

From Russia with Bugs

What do we know about the cyberattack on the US government?

Three former presidents pledge to get the jab.

Trump confirms he will leave the White House.

The transition is underway.

Orange is the new black

Is Trump frightened of prison?

Joe Biden has won the race to become the next US president.

Is it time for Donald Trump to get real?

The presidency is slipping away from Donald Trump. Here's a quick update from Sopes.

The Presidency rests on a knife edge. And we're back...

If you’re looking for a clear answer, you ain’t getting it here…

The Boss v The King of Europe

Workin’ our asses off

We’re on the home straight...

The candidates meet for a more measured debate.

Why the media isn’t covering a story Trump wants them to.

The candidates compete for air time in duelling town halls.

Trump returns to the campaign trail.

A fly stars in the VP debate.

How much confidence can we have in what we’re being told about the president’s health?

The president has tested positive for Covid. What does this mean for the race?

How Trump’s Supreme Court pick could swing the election

The Supreme Court Justice has died.

Will climate change impact the election?

Will Trump's alleged comments about the armed forces impact the election?

The former UK ambassador to the US.

Biden and Trump do battle over law and order.

The Democrats party on Zoom

Why did the president "wish her well"?

Who will be Joe Biden’s running mate?

How Trump can win

Protests and the President

Americast returns during a momentous week in US history

The presidency in a pandemic.

Coronavirus hits the race for the White House.

Has Joe Biden sealed the deal?

Elizabeth Warren drops out of the race.

Okay, so he isn't a Backstreet Boy but he IS back.

Berning Down the House

The A-Z of the US Election

It's basically Duolingo for American politics.

Who is Michael Bloomberg?

The Dems thrash it out in New Hampshire and Trump drops in.

Trump is cleared by the Senate.

A coin flips and the Democrats flop in Iowa.